BabyGifa Tips 8 Months Baby, What To Expect From An 8 Month Old Baby

8 Months Baby, What To Expect From An 8 Month Old Baby

admin Tips Add Comment
8 Months Baby, What To Expect From An 8 Month Old Baby - An 8 month old baby is starting to stand up, with the help of holding a chair or something around it like a chair or table. At this age, babies feel curious about everything that is in the vicinity. 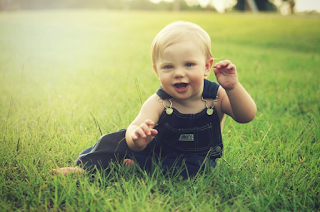 After mastering the crawling movement at the age of 7 months, then at this age, the baby will begin to lift his body with the hands and knees. Nowadays babies also usually start moving their bodies forward and backward. All of these movements play to strengthen the muscles as a foundation for walking. Generally 8 months baby can stand up, although still holding on.

Then at the age of 8 months, the baby has learned to sit up by bending the knee after standing up. You can help him learn to walk by holding his two buds.

Even though your baby has started walking, but he still does not need shoes. Many pediatricians say that walking barefoot can strengthen the leg muscles. The texture of the stepped floor can also help the baby to maintain balance.


Other abilities that are generally owned by baby 8 months, among others

The more active the toy moves in various ways, such as slamming, shaking, squeezing, hitting, and dropping it. Your baby does not intend to destroy the object held, but just wants to solve the curiosity and do all the things that make him happy

She likes to play with toys that resemble the original objects such as plastic cups, toy phones, or plastic shaped fruits. Make sure all have a safe level of the baby.

He can eat his own finger foods or food that can be held by taking and grasping food with his hands. Finger foods such as carrots, apples, Tripoli that have been cut lengthwise and cooked until soft can be given to infants 8 months. However, watch as long as he feeds himself to avoid baby choking on food.

He likes to put his finger into a hole or sidelines, like a keyhole or a toy. Watch as he plays with these objects.

An 8-month-old baby is able to respond to words he has heard so often. At this age, he may be able to pronounce a word correctly intended to refer to someone or something he wants, like 'mama' or 'papa'.

To stimulate her language development, invite her to communicate. this can be done by telling stories about many things like the routine that we are living, the activities being done, to read a fairy tale for him.

In addition, we can also continue to train him to speak and to recognize the body and surroundings, by designating the names of objects and limbs, such as 'cat', 'TV', 'nose', 'eye', or 'hand'.

The baby's 8-month social ability will continue to grow. At this age, he can imitate the behavior of adults, such as pretending to talk on the phone, drinking from a cup, or combing hair.

In terms of discipline, he still can not understand and follow the rules. But you can praise him if he does something good, so also forbids him if doing something less good.

Read AlsoMothers Must Know!!! What Can a Three Month Old Baby Do


His vision is now almost equivalent to an adult vision so that people can recognize people's faces from a distance. In terms of interactions with her surroundings, she may be afraid of things she does not know or new, such as whistles, phone rings, new toys

If upon hearing the buy he looks scared, give him a hug so that he feels comfortable. give understanding also to him the compound is all fine

Another thing to note

The period around the crawling and standing period is the time when an child often falls. You can help her by making our home safe and healthy for babies that are crawling or going to walk.

Keep medicines, cleaning fluids, sharps, pointed furniture, ladders, and electrical outlets out of the reach of a child.

Baby walkers are not recommended to use because this tool actually makes babies no longer want to learn to crawl, crawl, and stand. Yet all this can strengthen the muscles to walk. This tool can also be used as a foothold to reach objects that he should not touch like a stove or glass of hot water.
arrow_back arrow_forward view_carousel